How to Buy Black Swan Protection

Let's first understand what a Black Swan event is.

Black swan theory was developed by Nassim Nicholas Taleb. Without going into too much detail, a black swan event can be identified by three common traits.

Right now (Aug 2018) demand for VIX options is at the lowest level since August 2017. Anyone with long exposure to the market, IRA, 401K would feel that this is a good time to buy some sort of protection in case the volatility picks up and the market starts to head south. We're not talking about a 5% correction over the next few months, we're talking about a big, fast move to the downside.

One way to buy protection against a Black Swan is to go out and buy some VIX calls. First, we need to understand how VIX options work.

VIX options are not based on cash VIX readings.
Chris from Projectoption.com wrote about VIX options in detail:

Options on the VIX are European-style, which means they can't be exercised until expiration. Additionally, they're cash-settled, as the VIX doesn't have tradable shares that can be purchased or sold by exercising. So, if you own a 15 call on the VIX and the VIX Index spikes to 30, you can't exercise your option to buy VIX shares at 15 to sell them at 30. Instead, your P/L is determined by where 30-day implied volatility is expected to be on VIX settlement day, which is represented by the corresponding VIX futures price.

In other words, if you're going to buy VIX options, you have to look at the VIX futures to understand how much premium you're going to pay and where VIX needs to settle in order to make money on those options. Let's consider this example. We go out and buy NOV 15 calls that are trading at $2.40
This means that the VIX needs to settle at 17.40 for these calls to be at break-even. Here's the chart of VRO, the VIX settlement value:

Looking at this chart, it's obvious that we'd need to see the kind of price action that we saw earlier this year to get above that 17.40 level. If the market stays in a range, trades higher or slightly lower, we could assume that we're going to lose most, if not all of the premia we'd pay for those NOV 15 calls.

But is there a way to put on the same kind of protection and not lose the premium?

Looking at the chart of $VRO, the VIX hasn't settled below 10, except once and this was during the lowest volatility market since forever.
I would consider selling JAN 12 Put for $0.40 and buying JAN 20/24 Call spread for $0.40 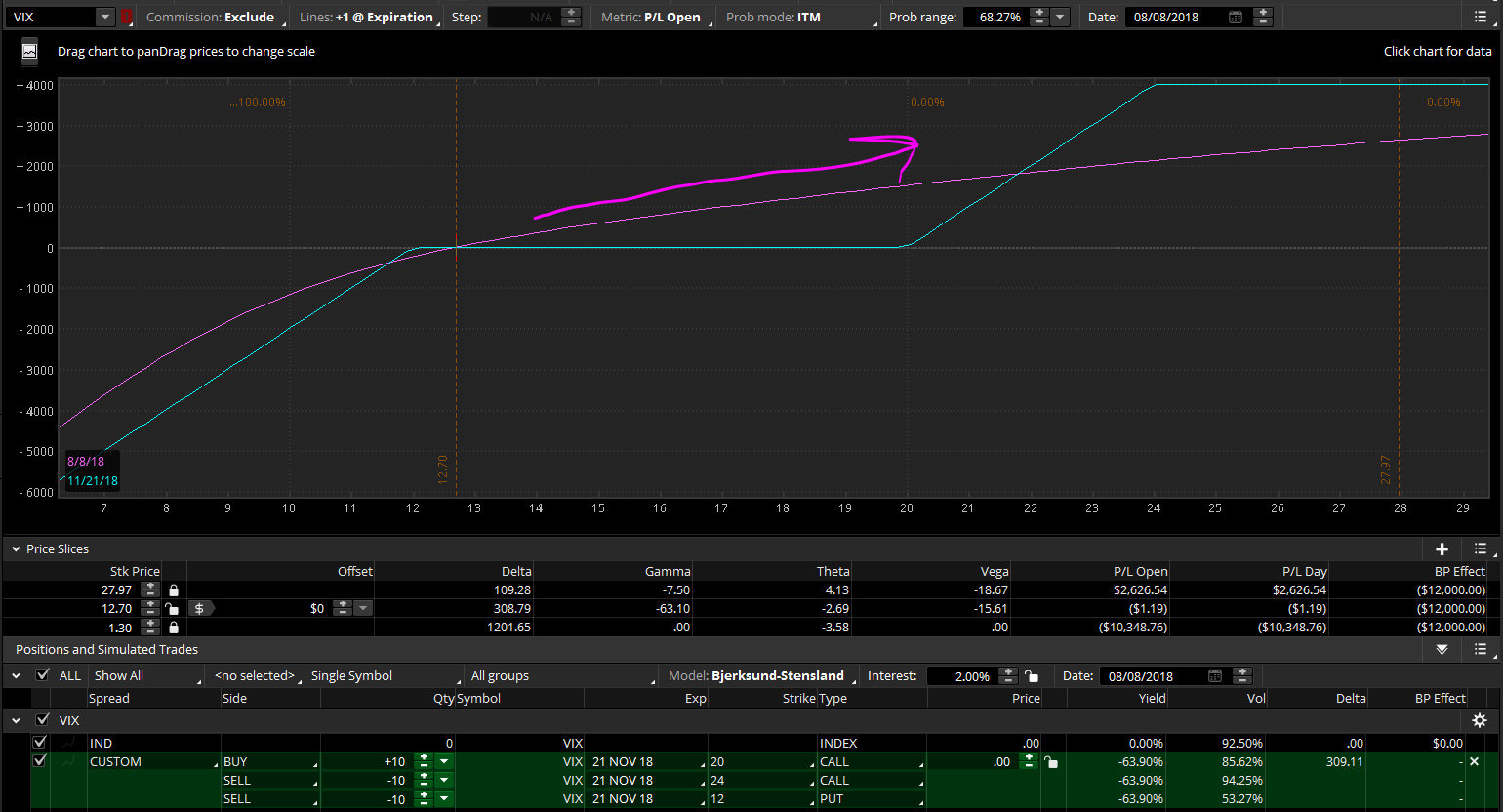 Here are the potential outcomes:

The market tanks hard and the VIX spikes to over 20 - this trade will help offset losses from long market exposure (remember the IRA, 401K, long-term investments?)

In conclusion, I feel that selling a put to buy an OTM calls spread is a better way to structure a Black Swan protection trade than just going out and buying OTM VIX Calls. This way I don't have to lose the premium I'd have to pay to buy the VIX 15 Calls.
If you are wondering about holding naked puts short, with the liquidation of XIV and other short vol funds getting blown out earlier this year, the odds of seeing the kind of low volatility environment are pretty low.

I may be wrong, I may be right, but we will find out one way or another.